It has been forever since I have had a chance to get on my computer. Life again got in the way. I let it get in the way and let my work suck away my soul. On top of which my laptop went down for a couple of weeks. Funny…the day I got my laptop back after being fixed is the day I walked out of work.

In Alice in Wonderland one predominant theme is playing cards. The origins of playing cards can be traced back to the use of Tarot cards in the courts of the Middle East and Europe. At one time Tarot cards were used in both divination and as a type of game–entertainment. The small booklet in this Alice in Wonderland Tarot deck, which I own, gives a good explanation of how the suits of a deck of cards matches up with the Minor Arcana of the Tarot. (I will give a break down of my own in a moment.)

History boils down to this: Most of the original artwork and the practice of using the cards as a form of divination comes from a Mystic branch of Judaism called Kabbalah. This religion became widely known in the early 2000’s when Madonna announced she was a practitioner. If you are interested in a more indepth history I encourage you to research.

The Major Arcana are no longer used in Playing Decks. There are twenty-two cards in the Major Arcana. Starting at 0 (The Fool) going through 21 (The World).

I will not go into the meaning of each card here. The main reason being while there is a general consensus on the meanings of each of the cards every artist and practitioner has their own nuanced understanding and reading of their deck.  Having said such there is a base accepted reading of the Major and Minor Arcana. Major Arcana are largely life events, universal forces outside of the individual’s control and big picture movement. Minor Arcana then are things which the individual controls, daily interactions, detailed events that are put into motion by the individual’s choices. 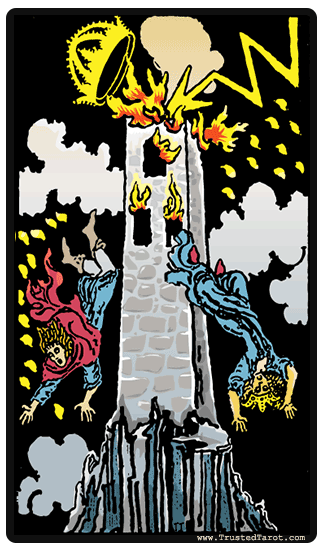 Catastrophic and complete change. The crashing down of old systems in an unexpected way.

This Card has been the theme of my life for the last week. While many people are afraid of the Death card showing up in their reading, which does not necessarily mean actual, physical death, it is The Tower they should be more wary. The Death card means a passing away of the old. It is does not mean the end but rather is a transition card from old to new. Yes, the transition may be sad and scary but it is necessary to grow. It is also in a way “soft” or “gentle” end to that which no longer can be sustained or helps you on your path.

But The Tower card? Nope. The only card worse if there is going to be change happening is the Ten of Swords. 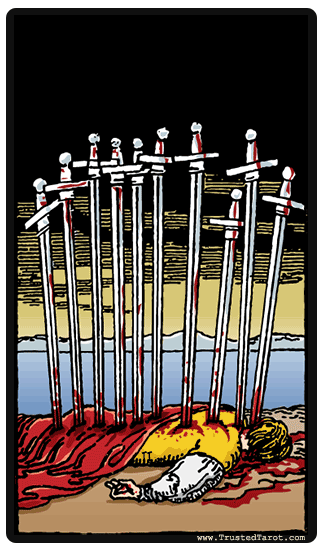 Tarot cards are incredibly visual. Any person can look at The Tower or the Ten of Swords and says to themselves, “Well shit. That can’t be good.”

So The Tower. Complete, unexpected, abrupt, upheaval. It is as if the Universe goes, “Hey, yeah…um…what you are doing…it is just not working for me…Change it. Now.”

Work was sucking my soul away. For over a month I literally went to work, worked 10 to 16 hours, came home, slept, got up, went to work. I do not misuse the word literally in this instance. It was stressful. I felt angry, powerless. I began to have a lack of confidence in what I was doing and my ability to learn the job, to eventually become good at it. So in a completely un-premeditive move I walked out. There was a staff shortage. No one to cover the rest of a shift that was not mine to begin with and I still walked out. I had not planned to walk out. I was planning on staying. In fact after I walked out I knew rationally in the back of my mind that I was fired but I still went into work the next day because I still wanted the job. I still needed a job.

The moment I walked out was a Tower moment.

At this moment I am trying to decide if I am using any of the old pieces to build new or saying the Hell with it and starting over completely. Either way something new will come of it and I hopefully have learned the lesson.

Sharing my journey of the all inclusive craft of writing. All writers are readers but not all readers are writers. Co-Author of the self published book series The Bear and Hunter. Author of Down the Road, Not Across the Lane: A Collection of Poetry View all posts by trinity8318

5 thoughts on “The Tower”

Follow Bear and Hunter Series on WordPress.com
THE PARMIGIANA WHISPERER

Classic and Unique Baked Goods Made with Care

You Can Do It
POETRY FESTIVAL. Submit to site for FREE. Submit for actor performance. Submit poem to be made into film.
The Art of Blogging

launches a project every month