Many years ago before there were Owls everywhere in popular culture, I was seeing owls. I saw them in the weirdest places too. Once I was traveling to my Aunt’s and besides the highway was a tow truck, of all things, with an Owl mascot for the business painted on the door. At first seeing all these owls scared me. I didn’t understand why I was being bombarded with owls. A friend suggested I look up the meaning of Owls.  I did and realized the message I was being given. It was something important and needed at the time in my life. So I embraced the Owl and its message.

Since then I am constantly on the lookout for messages. I have always had a strong sense of intuition, I have also always believed that Universe (Or God if you prefer) gives us messages. Even when I practiced Christianity it was hard to believe a Loving God would be hands off on the World he created. God may not micromanage but he at least lets you know he is available and their to help.

So the Universe sends messages. These messages may be to affirm you are going in the right direction. These messages may suggest caution. Theses messages may be given to signal an opportunity. After reading the book and watching the movie The Secret my belief in the messages the Universe puts out there were even stronger. Some people mock or even disregard entirely The Secret. While there are some ideas in the book which are extreme most are entirely on point and accurate. Since I have also studied and practiced Buddhism for a time and because it is simply a good life lesson to have, everything in moderation. Also in Buddhism the Great Buddha himself stated to never believe the words of another, explore and find the Truth for yourself. So with these two ideas in mind I take what I feel is right and fits me from The Secret.

Is that picking and choosing what you want? It can be seen as such. Really though I feel it is finding the guiding principles of your belief system. This belief system cannot be static or ridge though. If something makes you uncomfortable or challenges a belief it might be worth exploring whether it is time to change or re-evaluate that belief or to hold fast to it, reaffirming and better understand why the belief is so important to you.

Back to the topic at hand: Receiving messages. Most of my messages have come through the noticing of woodland creatures. Other ways I have found messages is when I notice particular colors over and over throughout the day or even weeks. Numbers are a big part of my messages too. Especially in my dreams.  I almost always have the number 3 or the number 4 in my dreams, the former being more often.

As I stated at the beginning of this post it started with owls. Many months later after owls started popping up in retail stores everywhere I joked that I would choose the next big fashionable animal. I chose foxes. Le sigh. It was as if the Universe took my challenge and decided the joke was on me. Foxes (and owls still) everywhere.  Again the meaning of Foxes was something I needed at the time.

My latest two notices have been deer (particularly doe) and as of this week porcupine.

All of these have significant meaning in general and especially to me.

An idea has struck me. I was going to go into the Tarot and my own Spiritual Path (including my God and Goddess) in this post. Instead I am going to spread them out. The next post which will either be today or tomorrow will be about Tarot or my Spiritual Path and why I chose it.

I will leave you with this one last thought. The Native Americans have a tradition of a medicine wheel which includes their version of a zodiac.  I learned about this tradition while at a Retreat. Below is a picture of the Medicine Wheel we set up as a group and a smaller version I came up with personally. You can find the meanings of the stones and placement  Here. 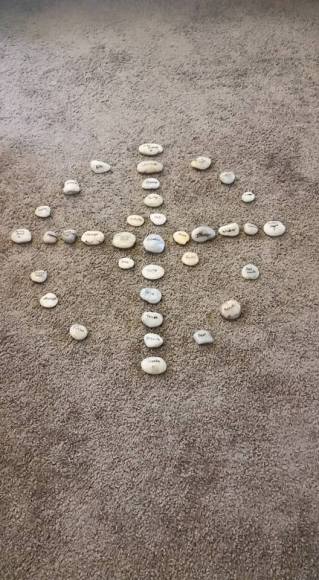 Sharing my journey of the all inclusive craft of writing. All writers are readers but not all readers are writers. Co-Author of the self published book series The Bear and Hunter. Author of Down the Road, Not Across the Lane: A Collection of Poetry View all posts by acliddle

Follow Bear and Hunter Series on WordPress.com
You Can Do It
POETRY FESTIVAL. Submit to site for FREE. Submit for actor performance. Submit poem to be made into film.
The Art of Blogging

A space to get motivated and inspired

Witches Of The Craft®

"Witchcraft for the 21st Century"